Italy is going through a reform of the non-emergency numbers, moving from the old traditional toll-free numbers to one unique contact point, much like 112. This was done after the EU commission directive on the implementation of 116 + digits to harmonize all social value numbers.

Following the EU directive, Italy created the 116117-toll free healthcare non-emergency number. Its process was designed replicated the 112: a person calls 116117 for a non-emergency health related query, a call taker qualifies the request according to a set procedure, and the call is forwarded to the proper number (general doctor, pediatrician, volunteers.)

In the beginning stages this project was labeled “Primary Health Care Model”. Its goal was to relieve hospitals of the stress of non-emergency calls, as people usually reached the hospital to enquire about educational or promotional programs, vaccines, information on therapies etc.. 116117 was supposed to be the first endpoint for non-emergency medical aid covering information, bookings of planned hospital transportation services, daily treatment scheduled, home care and telemedicine for fragile or special needs patients. 116117 could also keep track of these patients and log their requests and details.

This Primary Health care model evolved from a simple healthcare information number to a more complex system with creating a huge network of services: from the classical out of hours doctor to simple information such as the nearest pharmacies or the labs where to take tests, to help in changing the family doctor. 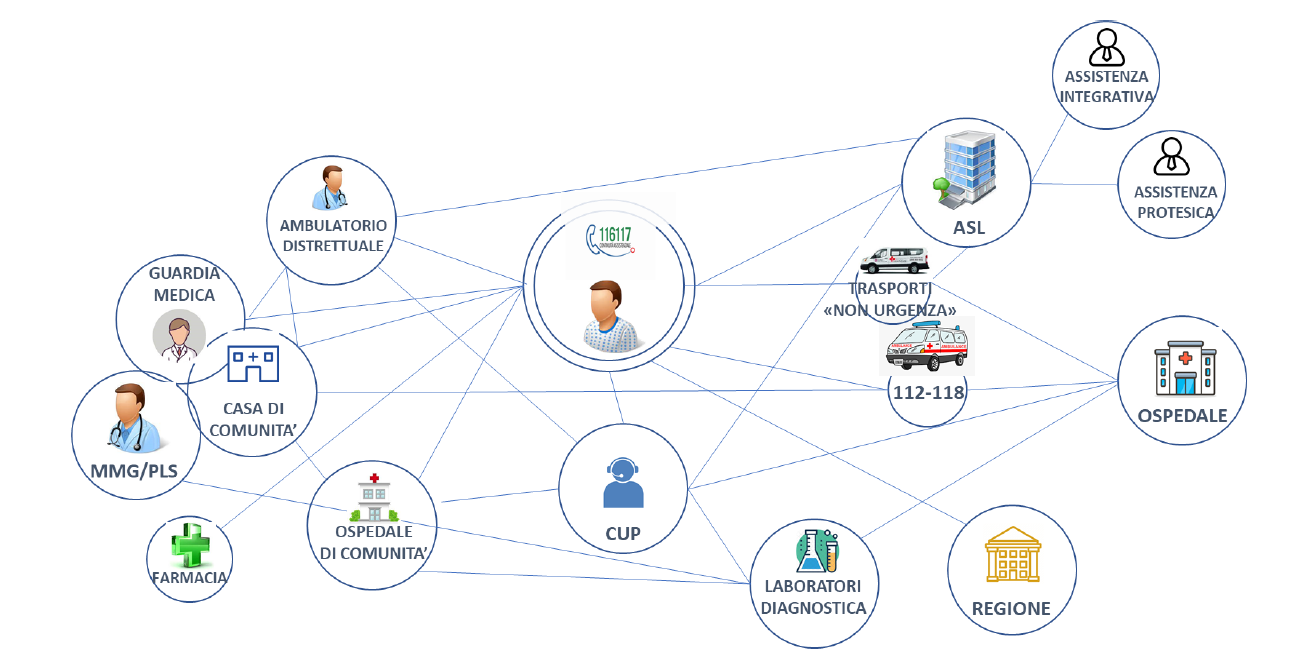 Beta 80 has been providing the infrastructure and technology to AREU, the Lombardy agency for health services, which is the same agency that manages 112 and EMS PSAPs. It was natural for them to include the 116117 service in their network, as it complements and works in close contact with 112 and EMS services.

Lombardy has 10 million citizens and sees the flow of a few million tourists per year, making it the size of an average European country. To manage the calls, the PSAP was equipped with 38 normal workstations and 14 supplementary workstations for complicated periods. The PSAP employs all civilian call takers and uses a question-based triage filter very similar in concept to the 112 answering protocol. PSAP managers and call takers are responsible for the PSAP upkeep and maintenance. AREU also provides and manages the the second level PSAP and non-emergency numbers, such as the remote technology for doctors giving the medical consult. AREU is also in charge of the training for the use of these technologies.

Number of calls: 116117 handles and average of 2.500 thousand calls per day, while the 112 emergency number averages 12,000 calls per day. In the first six months of 2021 the PSAP averaged 90.000 monthly calls, the number includes calls also from nearby regions which are processed in a different flow than the standard ones.

Calls forwarded: how many of these calls needed the intervention of a doctor? About 57%, others were treated and managed without any medical intervention as they involved general information.

Calls forwarded to the ambulance service: Less than 1%. 116117 does not forward calls to 112. This is an unnecessary step as otherwise 112 would need to forward them again to ambulance. There is a direct connection between 116117 and II level EMS PSAP.

Weekly calls: most calls take place in the weekend, as family doctors are not available. Weekends triple the amount of calls compared to the weekdays.

Processing time: procedures are placed to limit the processing time, it averages 175 seconds. The time improved in the six months as call takers got better acquainted with the processes.

Call distribution: Milan, is the capital city and the most populous prefecture accounts for 33% of the calls. The rest are evenly distributed between the other provinces.

The 116117 was activated at the end of 2019, shortly before the pandemic. It had just begun its activities and it had to reform its course to test and evolve the service according to the historical needs. It was under daily reviews of the procedures, that needed to be adapted and changed. It was a challenge for both AREU and Beta 80 as the technological provider.

Now and in the future

After two years, citizens are now familiarizing more and more with the number. The region is now going ahead with the structuring of a more accurate filter and question-based protocol to include many more non-emergency services to the number. It is an ever evolving system, which could be adopted by other regions as the results show an efficient system that is very beneficial to the population.

Lombardy Region and AREU are once again among the most innovative in European emergency healthcare...

An efficient vehicle positioning is extremely important for emergency response. AREU, the Regional...